In response to the climate crisis, TMI is advocating and implementing a climate change mitigation project based on sustainable reforestation using edible mycorrhizal fungi as an incentive for the rural communities in Southeast Asia. We collaborate mycologists, soil scientists, senior scientists and other agencies including universities, government and insitutions working together to mitigate climate change. We have carried out the application of ectomycorrhizal fungi in reforestation projects in Southeast Asia.  At present, the Thailand and Indonesia project has started and begun to take shape. Vietnam projects will be start in March 2019.

In facing the land degradation in Thailand, using local mycorrhizas can greatly speed up reforestation by enhancing the growth rate of native trees. Also, inoculating with some ectomycorrhizas (EcM) when we plant the native trees especially at the seedling stage, the land could produce valuable edible mushrooms for community’s consumption when the host trees are healthy, usually after 2 to 3 years. For example, if we plant Yang Na (Dipterocarpus alatus) seedlings that are inoculated with edible mycorrhizal fungi, we and our generations could harvest these mushrooms continuously if we take good care of the forest. 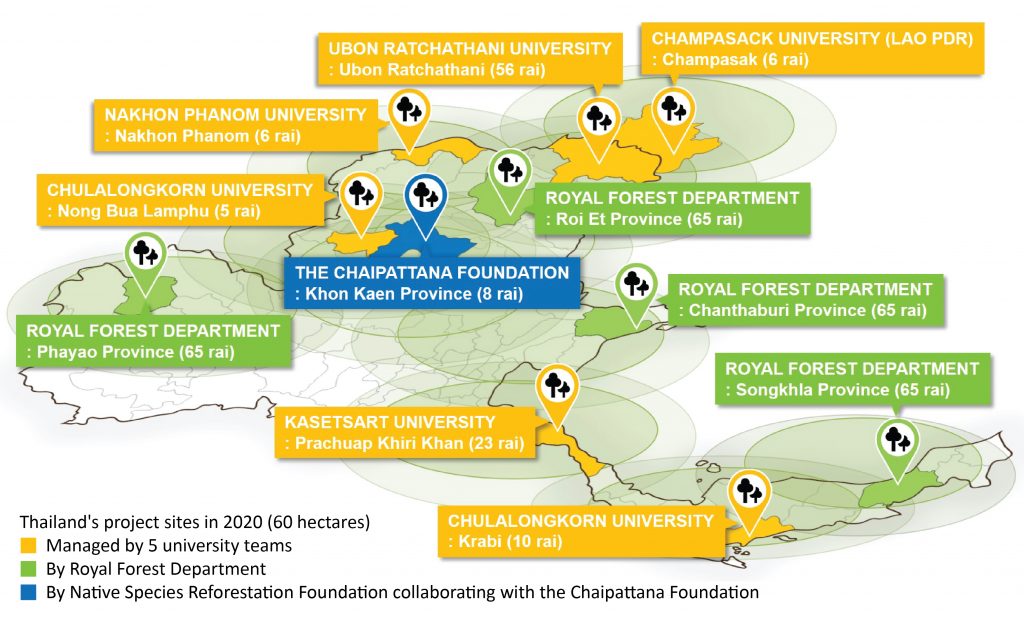 The goal of this project is to carry out community-based reforestation/restoration in deforested or plantation areas in Thailand. The work involves:

Mycorrhizal fungi associated with plant roots increase the absorption of nutrients, particularly phosphorus, and thus enhance the growth of trees. By this reason, the technology to use mycorrhizal fungi is an effective method in reforestation. We have finally identified 10 project sites for 4 regions and 1 site in Lao PDR. In these sites, we choose native tree species such as Anisoptera costata, Shorea roxburghii, Dipterocarpus obtusifolius, Dipterocarpus alatus and Hopea odorata. We prepared a large number of seedlings inoculated with EcM for experiments to establish the most effective operative method for our project. Besides, post-planting tending are also being prepared for the anticipated severe drought in dry season.

One of the collaborators Native Species Reforestation Foundation (NSRF) has set up a website and Facebook to educate people and promote the project. The website is now on the developing process (a demo version: https://nsrf.or.th/en/home-nsrf) and will be published soon. For carbon sequestration, we collect the baseline trees data in project sites and measure the total carbon content in soil before and after the project in order to find out the positive effect of the reforestation process in carbon sequestration.

To develop biodegradable pots for seedlings, workshops from the university teams have been conducted. These include the eco-pot workshop by Ubon Ratchathani University on February 10, 2019. The pots have been experimented with different formulas: mainly using mushroom sawdust, dry cow dung, and rice starch glue. Another natural seedling container was experimented by NSRF using coir fiber, coir dust and natural glue.

After testing durability and assessing cost-effectiveness, NSRF natural pot formula is selected and now the pot’s size and shape is being developed for lowering the transportation cost. 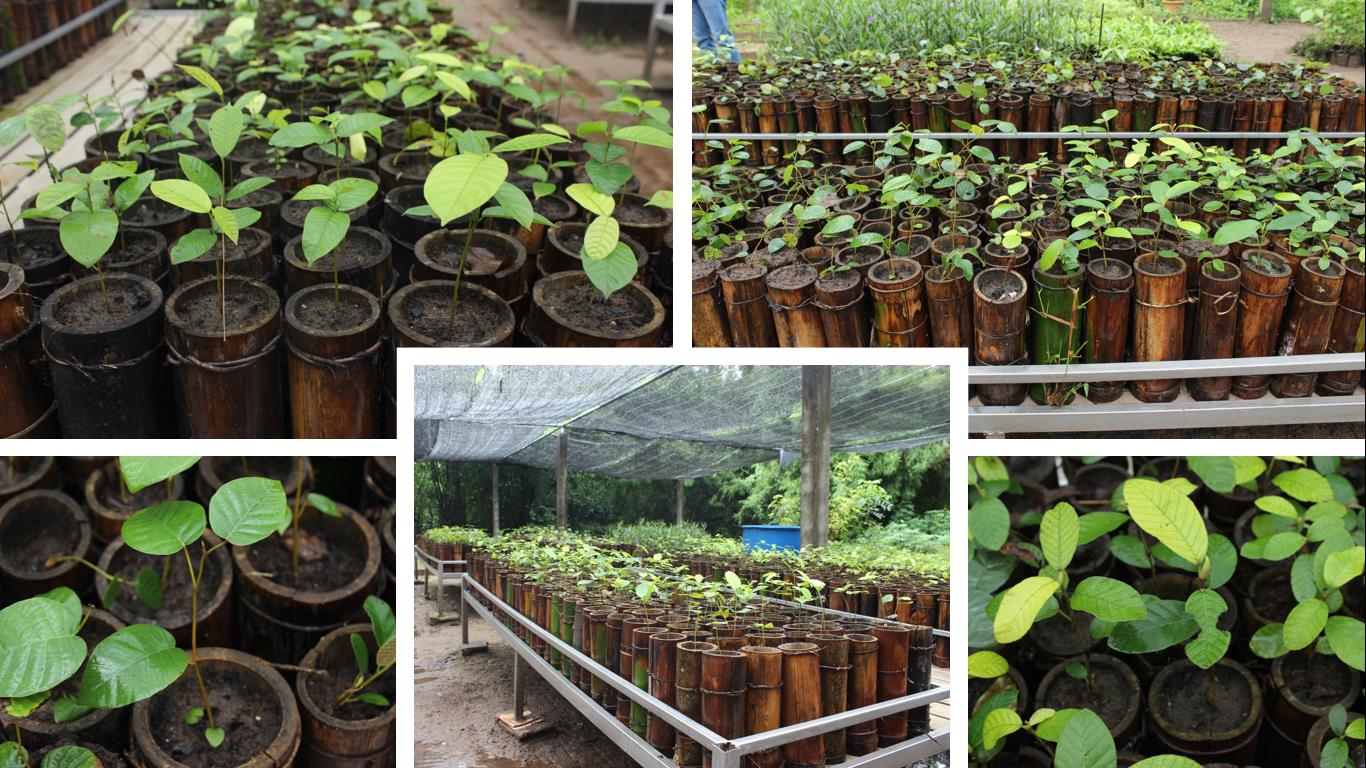 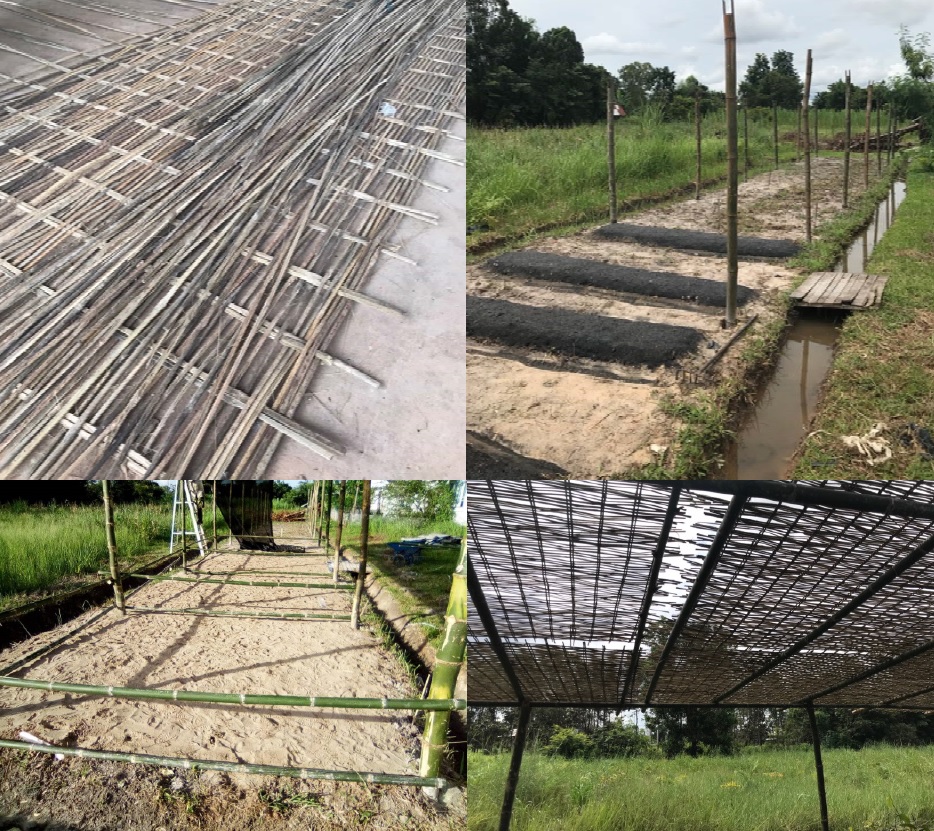 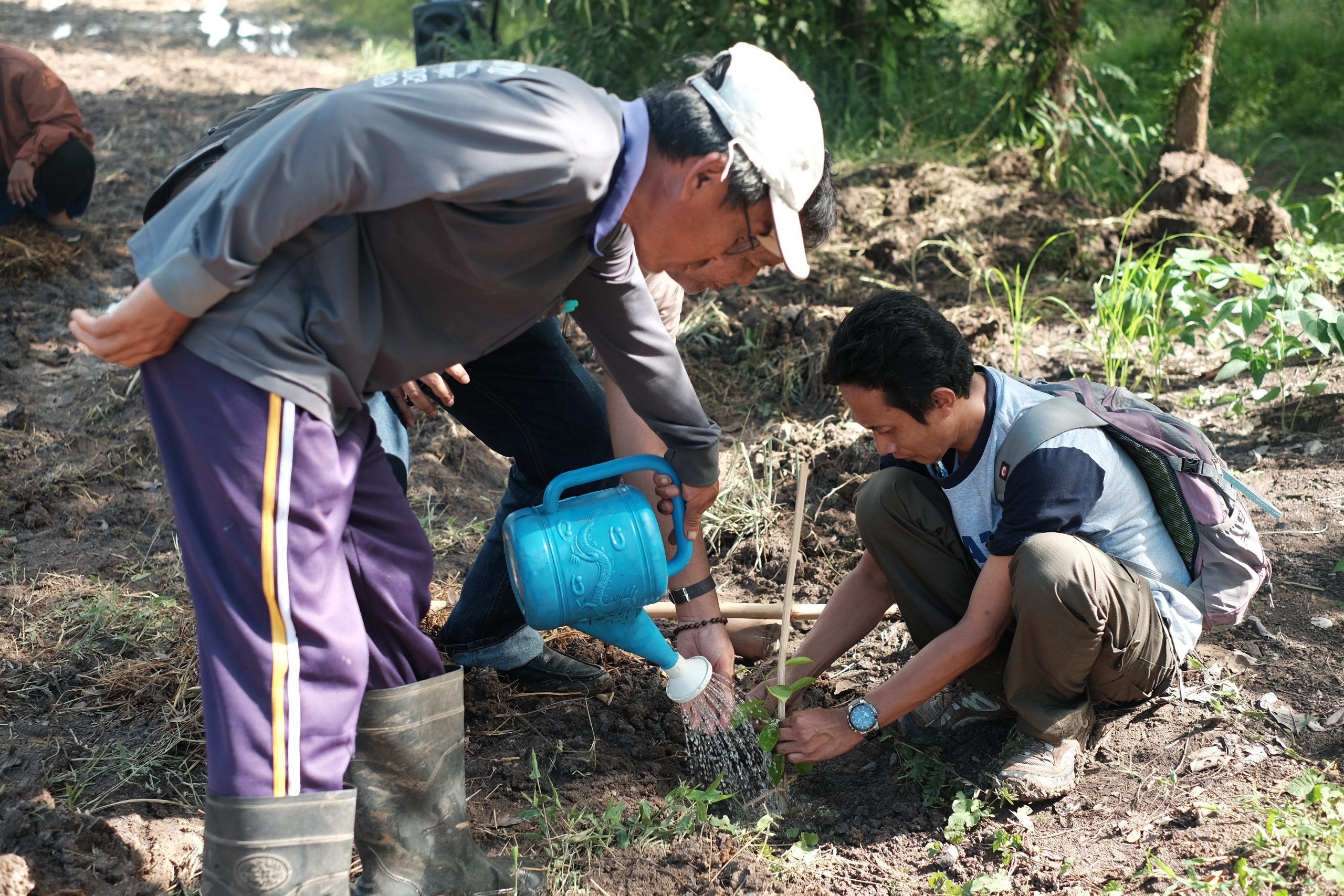 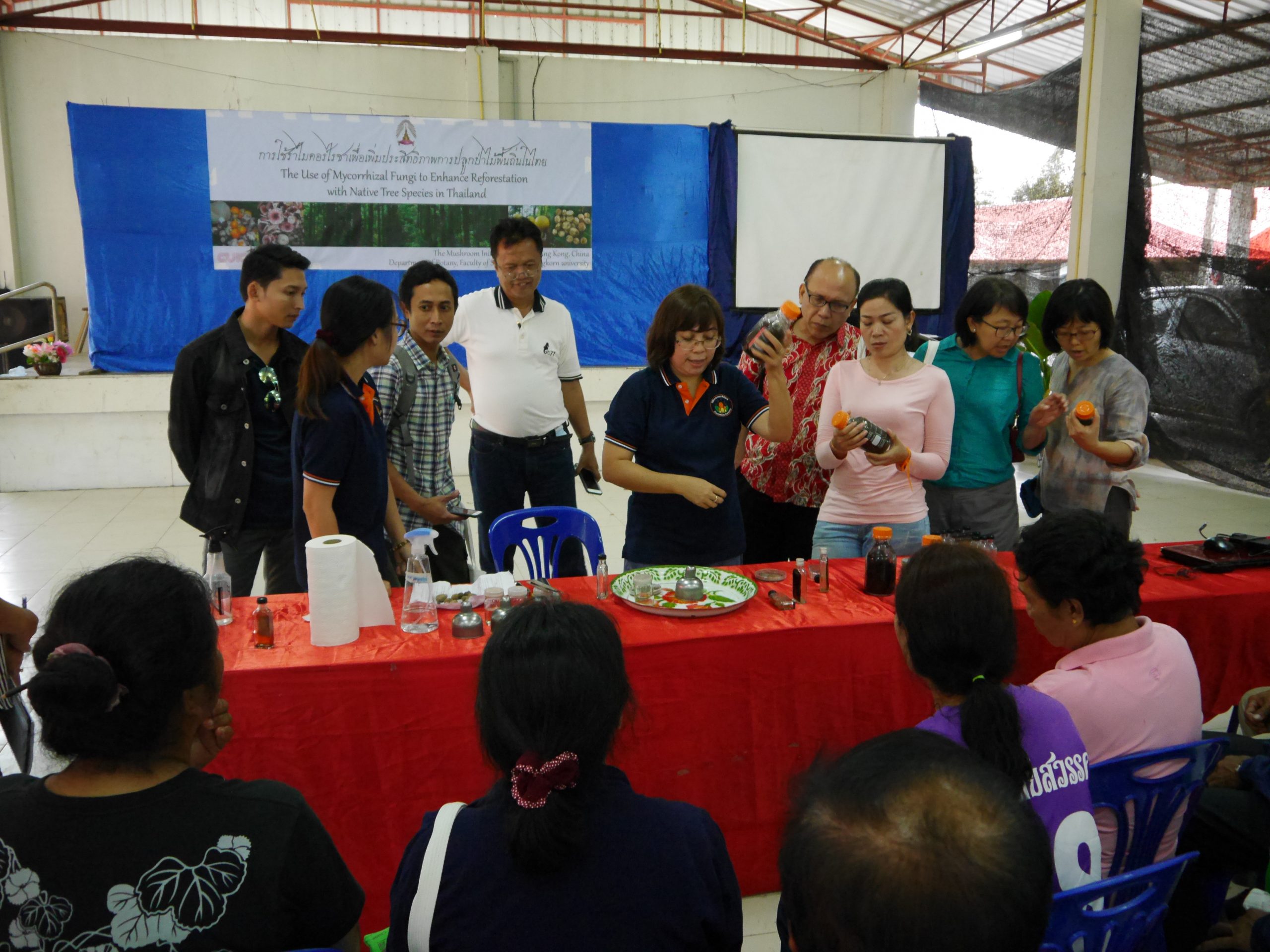 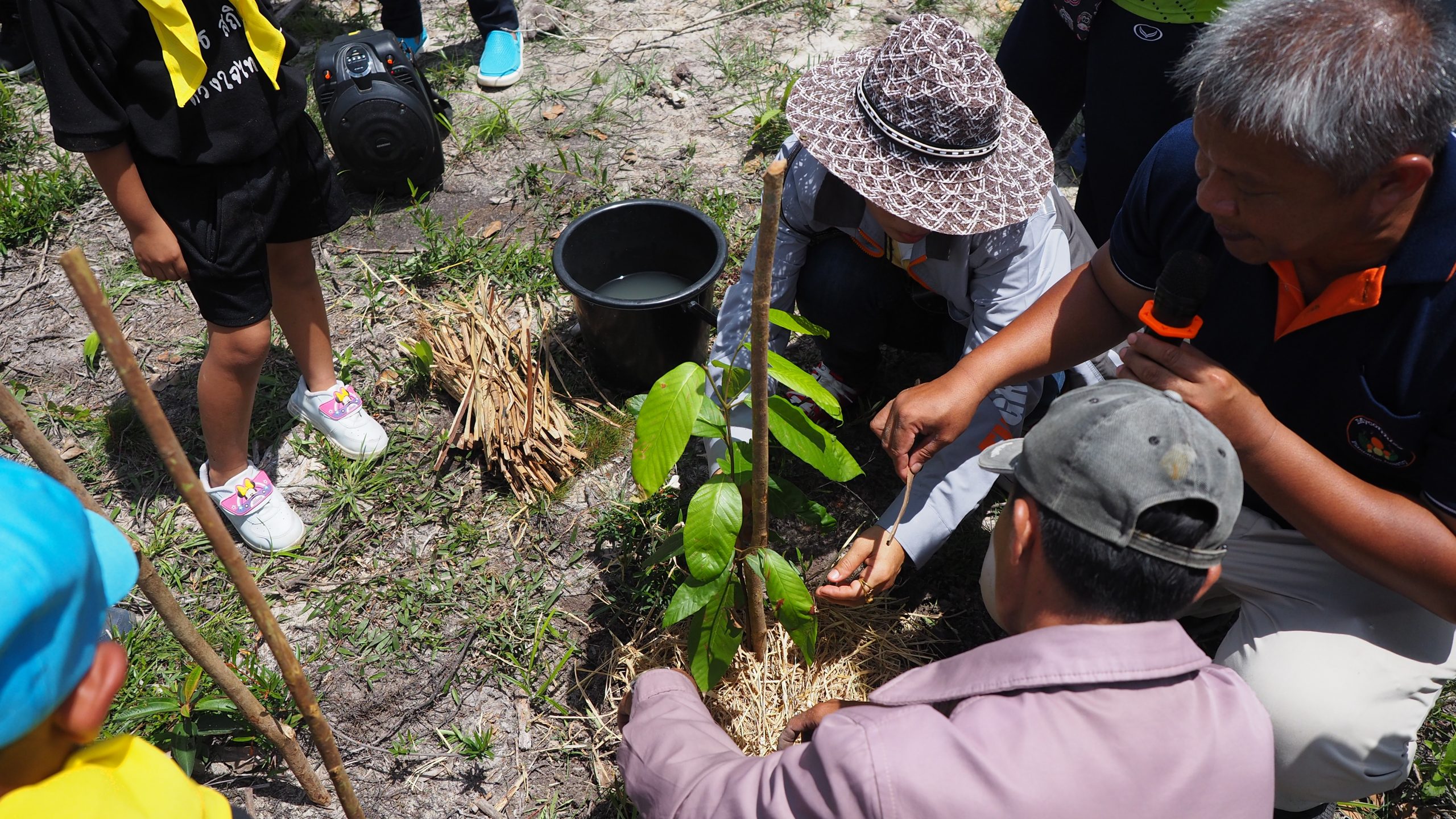 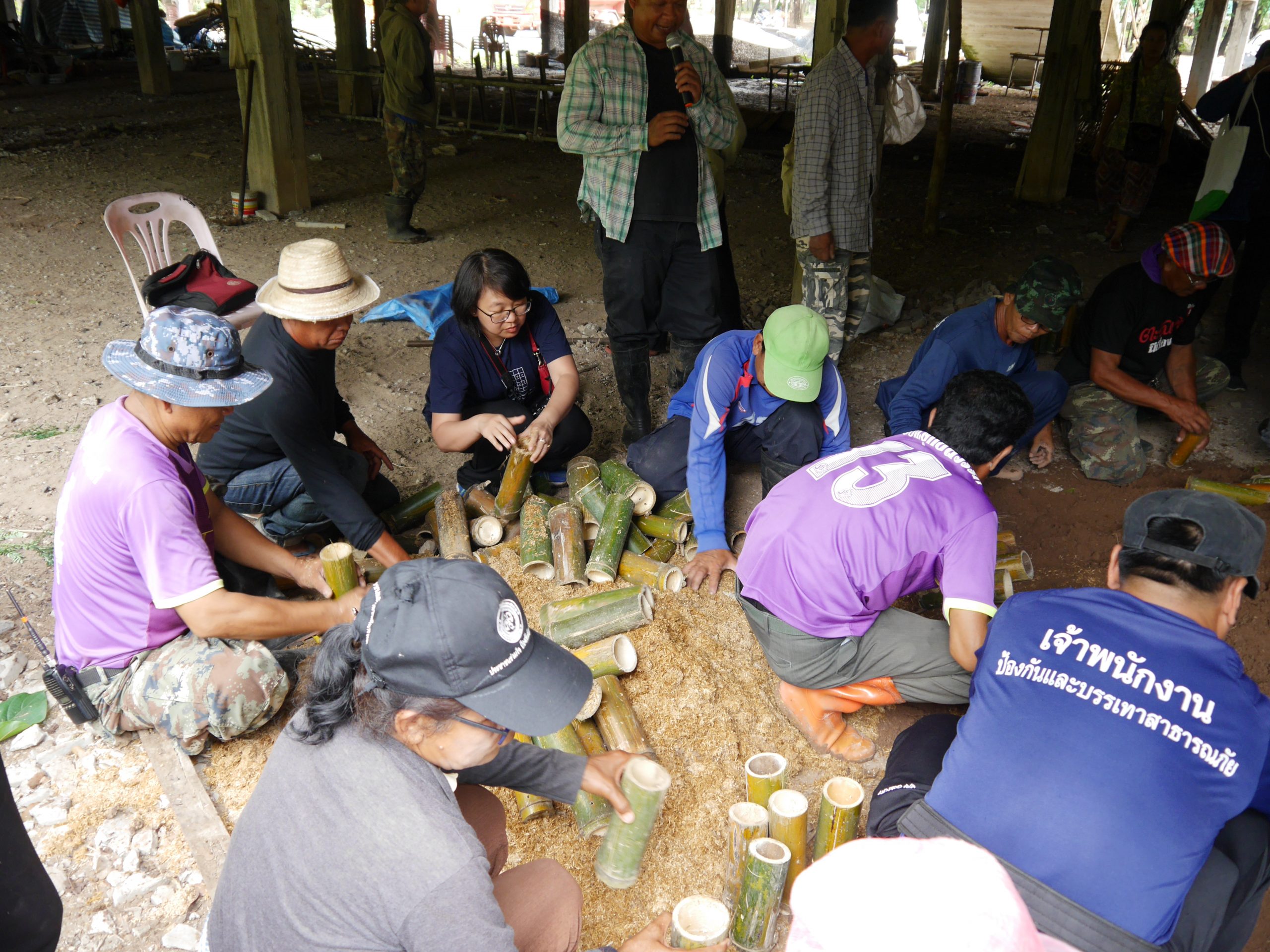 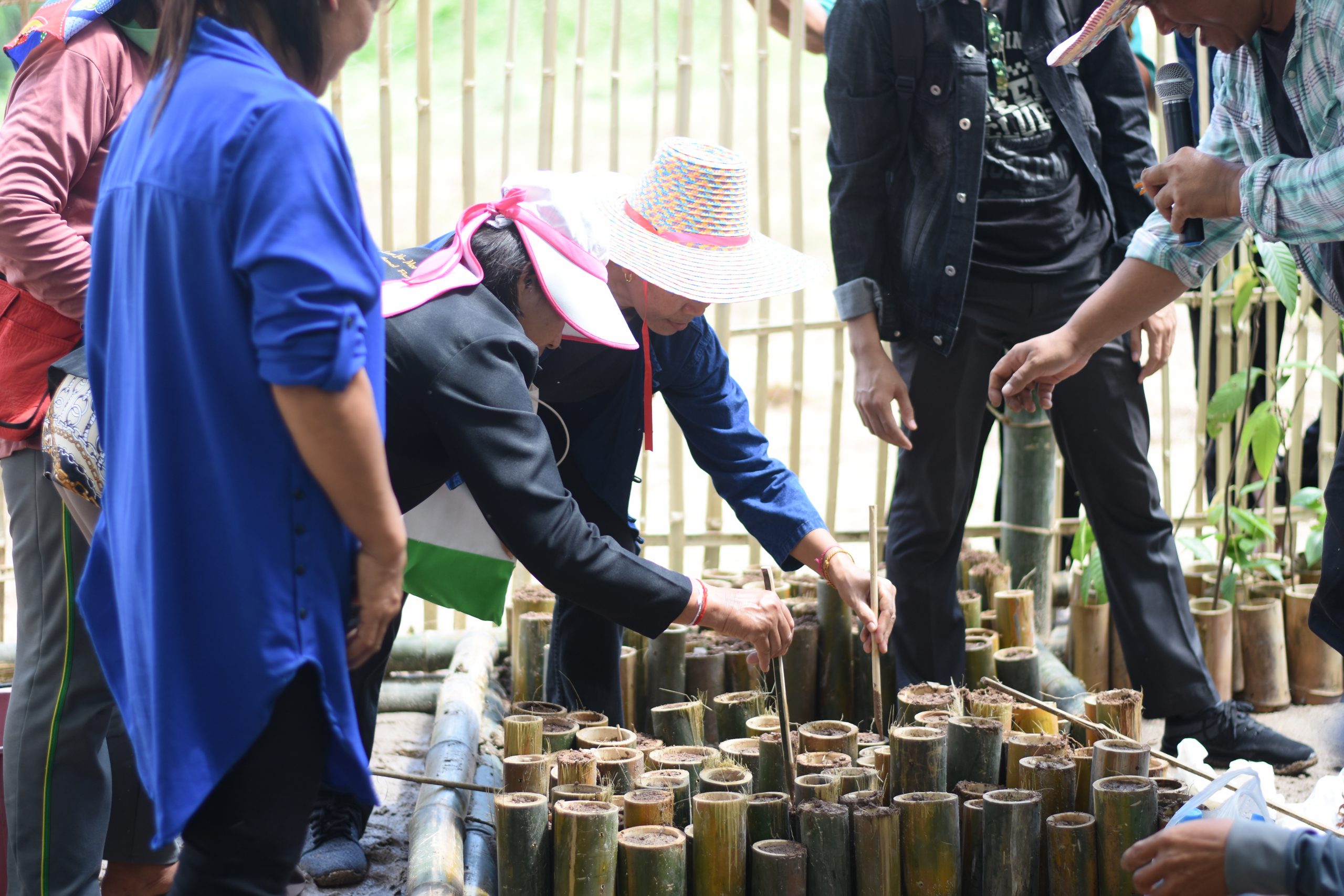 As an essential carbon sink, the peatlands play a major role in the global carbon cycle and have been deeply affected by the impacts of human activity and climate change.

Peat swamp forests form where saturated soils or frequent flooding cause the partial decay of organic material. The accumulation of so much material means tropical peat swamp forests store a lot of carbon: up to 10 to 20 times more than nearby lowland forests on mineral soil, depending on forest age and soil depth.

When a forest is cut down, the loss of aboveground carbon is obvious. But in peat swamp forests, 90 percent of the carbon is stored underground, making the problem of peatland destruction difficult to see.

This pilot initiative aims to mitigate climate change through the restoration of Indonesia’s peat swamp forests. The application of Mycorrhizal fungi can enhance the growth of native tree species. With the degradation of peatlands on the rise globally, the potential for positive impact is great.

This project is a partnership between The Mushroom Initiative (TMI) and the Forest Research and Development Centre (FRDC), one of four centers under the Research, Development & Innovation Agency of Indonesia’s Ministry of Environment and Forestry.

The objectives of the project are

Dr. Ir. Maman Turjaman (pictured) is a senior scientist and a well-known mycologist with a background in Mycorrhizal research in the Indonesian peatlands.

The first project site is located in Pulang Pisau Regency in Central Kalimantan, at Tumbang Nusa Forest research station (KHDTK). The site is managed by the Forestry Research Institute of Banjarbaru of the Ministry of Environment and Forestry’s Forestry Research, Development, and Innovation Agency.

The second project site is in the Pedamaran Limited Production Forest (LPF) in Ogan Komering Ilir Regency, South Sumatra. It is managed by the Forest Management Unit (FMU) of the Forest Service Office of South Sumatra Province.

The Tumbang Nusa KHDTK, approximately 5000 ha in size, is managed by the Forestry Research Institute of Banjarbaru, of Indonesia’s Ministry of Environment and Forestry’s Forestry Research, Development, and Innovation Agency.

At altitude of 0 to 5 meters above sea level and an elevation of 0% to 18%, these relatively flat, secondary peat swamp forests have a humid tropical climate. The average temperature is 27oC with an average rainfall of 3383 mm annually. Dry months are from July to September. Vegetation is mainly dense natural tumih (Combretocarpus rotundatus) and several species of peat swamp trees. The endangered Bornean orangutan, the black-naped monarch, and the Oriental dwarf kingfisher live in surrounding areas.

This figure illustrates dominant vegetation cover in the measurement plot:

After a major fire in 2015, revegetation activities were conducted by various organizations. These activities included the planting of more than 25,000 seedlings by 1,700 volunteers. Other activities focused on research and development, supported by national and international funding bodies. One of these international organizations is The Mushroom Initiative, here focused on the application of Mycorrhizal fungi to restore degraded tropical peat swamp forest.

We aim for Tumbang Nusa KHDTK to become a science education site, or “edu-park,” to promote peat forest rehabilitation technology through the 3 R’s: restoration, rewetting, and revitalization.

The Pedamaran LPF is part of the peat swamp forests located in the River Hydrological Unit (RHU) of the Sibumbung River and has an average peat depth of more than 3 meters.

The collaboration between the Forest Research Center Development (FRDC) and The Mushroom Initiative (TMI) involves a 100-hectare restoration pilot plot located in the Special Block. Revegetation activities in these areas will be carried out in stages: 10 hectares in 2019, 45 hectares in 2020, and 45 hectares in 2021.

The pilot plot is located in an area that saw serious fires in 2015. In 2019, the area was dominated by open areas in a natural succession of vegetation.

We will be planting these diversified native tree species:

More native species will be identified in both sites and added from time to time.
Until 2020, we have implemented some workshops and started planting trees : 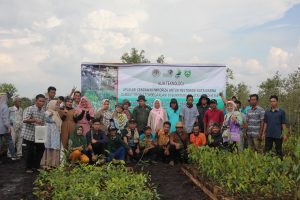 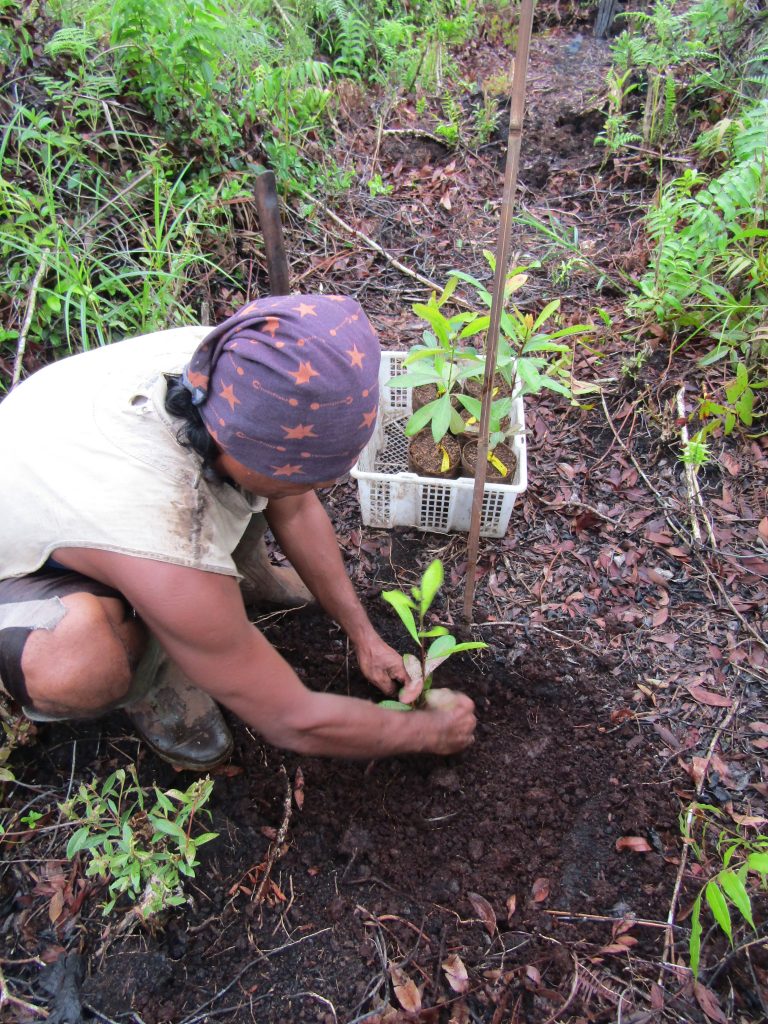 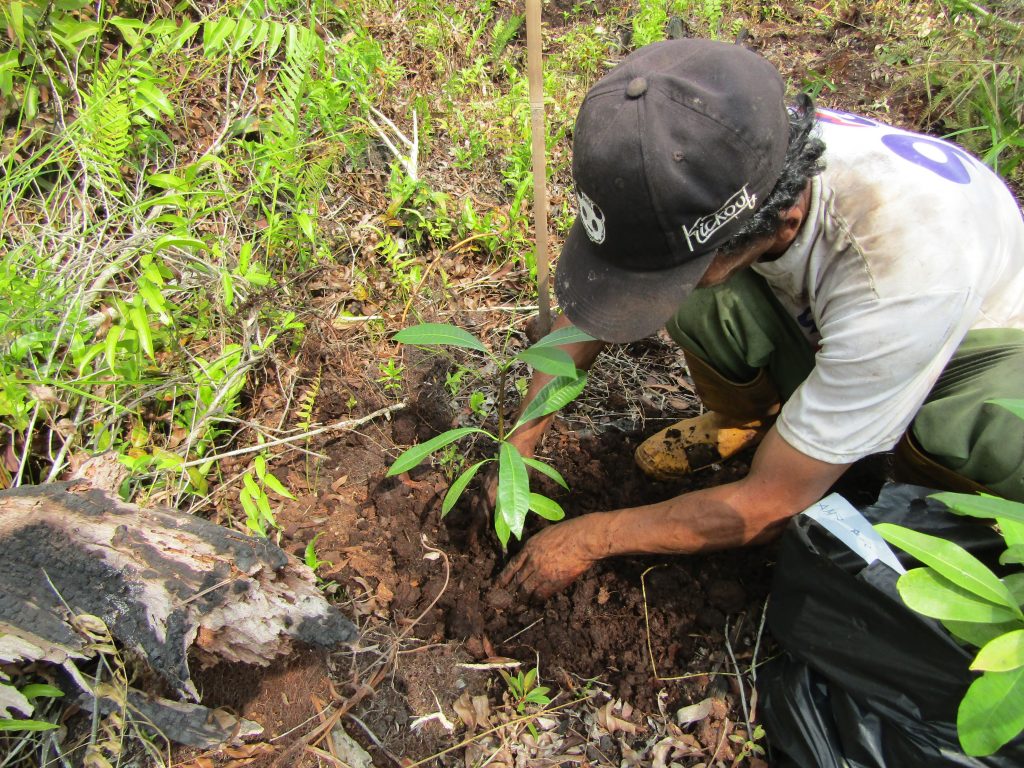 Forest Research and Development Centre (FRDC), is one of four centres under Research, Development & Innovation Agency under Ministry of Environment and Forestry in Indonesia.

Most of studies about ectomycorrhizas of P. kesiya focused on some limited target fungal species in forest and not included the succession of ectomycorrhizal fungi with sporocarps. Understanding the ECM fungal communities attached with P. kesiya in several stage of forest will give the full image of the sustainability of pine’s forest.

Until now, almost cultivated area of P. kesiya in Vietnam were planted by seedlings. Many trials about directly germinating were not success with less than 30% area can be cover after 3 years (From the records of Da Nhim Watershed Protection Forest). It should be caused by the lack of ECM germs in the new planting area. Understanding clearly the role of ECM community in primary success of P. kesiya will contribute to the approach of directly germinating pine seeds in field and can cut off the cost in nursery as well as the pollution of nylon bags using for seedlings.

Also, this project will set up the model for reforestation of P. kesiya forest for local communities from setting up the reforestation to income generating without destroying nature from their land. We will work together with the communities, officers and related groups to develop a community-based ecotourism project. It is a very important economic incentive for the communities to protect the forest sustainably.

The carbon accumulation will be investigated by exchanging the volume of wood by previous research model (Vien & Ton 2010). The project sites will be monitored and calculated the carbon accumulation using the previous model. The proceed is adapted to the international standard of carbon measurement. The data will be used to evaluate the growth of pine and impact of the project.

Two Demonstration sites will be conducted in southern Vietnam. Those areas are near the famous tourist attraction located near Da Lat. One is the land near the nature forest in Da Nhim Watershed Protection Forest (2 has shown in Fig 1) and another one is the degraded forest of Tay Nguyen Institute of Scientific Research (1 hectare spare land out of 10 hectares degraded forest), Lam Dong Province (Fig.2 ,3), Vietnam. The forest of Tay Nguyen Institute of Scientific Research was damaged by forest fire in 2015 and in the recover stage.